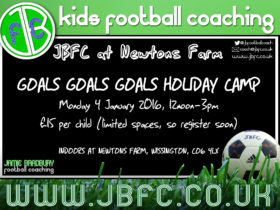 Ball out of play

The ball is out of play when:

The minimum height of ceilings is 4m and shall be stipulated in the competition rules.

If the ball hits the ceiling while in play, the game is restarted with a kick-in taken by the opponents of the team that last touched the ball.

The kick-in is taken from the point on the touch line nearest to the place on the ground above which the ball hit the ceiling (see Law 15 – Position of kick-in).