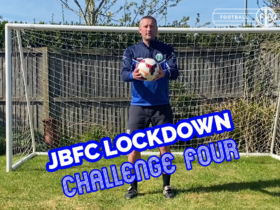 On this day in 1989, Steve Bull scores on England debut to help the Three Lions beat Scotland at Hampden Park in the last ever Rous Cup match…

England travelled to Hampden Park for what would be their last ever Rous Cup fixture. The annual triangular tournament revolving around the England-Scotland rivalry began in 1985, and this time also involved Chile, who Bobby Robson’s team had drawn 0-0 with four days earlier at Wembley.

Due to the First Division title decider between Liverpool and Arsenal taking place at Anfield just 24 hours before, no players from those clubs were involved, but it did mean chances for John Fashanu, his second and final appearance, and Third Division hitman Steve Bull.

With only a blue keeper shirt in the England kit bag, which clashed with the home team’s tops, Peter Shilton was forced to wear a grey and yellow Scotland jersey for the game, the same as his opposite number Jim Leighton, but it appeared to affect the Scottish forwards more.

The Three Lions took just 20 minutes to get in front when Chris Waddle, sporting his fabulous mullet hairstyle, ghosted into the space six yards from goal to meet Gary Stevens’ delivery with a perfectly timed bullet header into the top corner.

It was by no means one way traffic, but Scotland failed to make the most of their many opportunities, finding Shilton in good form.

And they were made to pay with eight minutes remaining. Bull’s 37 goals had fired Wolverhampton Wanderers to the division three title, so he was given the chance to try his luck at international level after replacing Fashanu with half an hour played.

Challenging Dave McPherson to a high ball on the edge of the box, the 24-year-old debutant got a fortunate knock-on into the area and lashed home without a second thought giving England Rous Cup victory for the third time.

Up to then England had played the Auld Enemy every year since 1872, other than during the breaks for two world wars, but they would not meet their neighbours again until the Euro 96 clash at Wembley seven years later.

But it will always be remembered as the day Steve Bull scores on England debut.