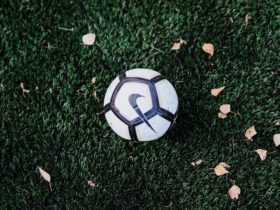 Launched in April 2013 by FA Licensed Coach and Great Horkesley resident Jamie Bradbury, JBFC is aimed at giving boys and girls the opportunity to learn, have fun and fall in love with the game in an enjoyable and pressure-free environment, as Jamie explains…

“It’s easy to think that, with football being our national sport, it’s almost our birth-right to know the game, to love the game. But that’s not true. You have to fall in love with it, and grows within you.

“I’ve loved football for as long as I can remember and have played – and still do – since I was eight years old. But when didn’t I start playing earlier? Well, there simply wasn’t the opportunity.

“Back then, in the early 1980s, football coaching for kids was limited. The coaching I received was from enthusiastic volunteers, save from a rare visit from a Colchester United coach, but that was how it was. And I loved it.

“So when I set out at the start of JBFC over two years ago, my intention was to give kids the chance to fall in love with playing the game that has been a massive part of my life.

“The game has moved on since the ’80s, not just here but around the world. And we have to move with it. Now, it’s highly unlikely anyone from Essex will ever win the World Cup or Champions League again, let alone someone I coach, but that’s not why I run JBFC.

“The majority of football played in this country is at grassroots, and that is something we must help continue to thrive.

“But football isn’t just about the game, it’s about everything that comes with it; fitness, team-spirit, camaraderie, friendship. It helps people develop physically, psychologically, socially and technically. It’s much more powerful than what can be seen during a 60 minute kickabout.

“So, every Saturday morning when I carry my gear over on to the Jubilee Field to set up, I await the arrival of the kids with excited anticipation. I enjoy coaching them as much as I love playing the game myself.

“At their age it’s not about winning or being the best, it’s about learning to fall in love with the Beautiful Game and everything that comes with it.”

“At their age it’s not about winning or being the best, it’s about learning to fall in love with the Beautiful Game aeverything that comes with it.”