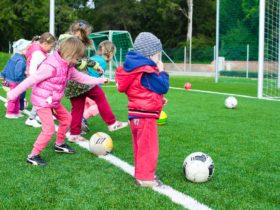 David Beckham admitted he was amazed by the facilities at St. George’s Park and said it’s a “dream” place for England’s players to train.

On his first visit to the national football centre in Staffordshire, the former Three Lions captain was impressed with the facilities, which include 12 external pitches and one full-size indoor 3G pitch.

And the 36-year-old says the peaceful setting of St. George’s Park makes it a perfect place for international players to prepare for games.

“As an ex-England player and captain it is always a dream to come and spend time somewhere like this,” he told TheFA.com.

“When you come away with the team to somewhere like this is special and to work here is really incredible.

“It’s peaceful, but you can feel there’s a certain amount of history even though it has only been open for two years. The way certain things are incorporated into the facilities really is incredible.

“It’s nice to hear rooms are named after certain players the fans have voted for, like the ‘Paul Gascoigne Room’ or the ‘Bobby Moore Room’. It’s special. Really amazing, so impressed.”

As he surveyed St. George’s Park’s immaculate elite pitch, where Roy Hodgson’s England team are training this week ahead of Monday’s trip to Switzerland, Beckham purred: “It doesn’t get any better.

“Obviously we always played on nice pitches, but to have a pitch like that to train on this day in, day out when you come away with the international team is pretty incredible.”

Beckham’s visit to Burton came in another busy week for the national football centre. While Hodgson’s team headed up to their base following the 1-0 Wembley victory over Norway, England’s U17s, U20s and Under-21s all spent time in residence in preparation for important international fixtures.

Meanwhile, this summer has also seen the facility play host to Barcelona, Porto, Steaua Bucharest – and it’s a fact that hasn’t gone unnoticed by the 39-year-old.

“It’s not just the senior team it’s helping, but all the way through from the young kids to the women’s teams,” he said.

“Obviously as an international player when you come to a place like this it’s peaceful, you can rest, you can prepare. It’s great for young players to come here and aspire to be great England players in the future.

“That’s the great thing about having a facility like this one. It’s like Wembley Stadium, everyone dreams of playing at Wembley, as a young kid I grew up as a Man United fan and always wanted to play for my country.

“And I was lucky enough to get the opportunity to play at Wembley. It’s moments and places like that which kids can really aspire to.”

Beckham’s last game for England was nearly five years ago, but he retired from playing altogether in 2013 after a short spell at Paris St-Germain.

After coming to The FA’s home of football development where old Manchester United team-mates Gary Neville, Ryan Giggs and Paul Ince have all studied coaching qualifications, he is not sure yet if he’ll follow that path in the future.

“You never know, in a few years I might change my mind, but at the moment I’m happy doing what I’m doing,” he admitted. “I’ve got a few things going on with Miami and the MLS team.

“But [St. George’s Park] is great for coaches to get the chance to come here and do their badges, and for young coaches to become future Premiership and England managers.

“In the future I might change my mind, but at the moment I enjoy coaching my own kids and other kids, but we’ll see what happens.”