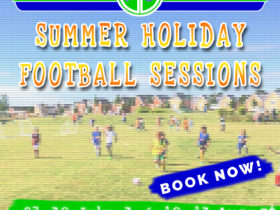 January’s Youth Award Module 2 got me back in the mood for coaching courses and ready for what would, to date, be my biggest challenge in coaching – the UEFA B Licence.

I had wanted to get on the course ever since I picked up the bug on the Level 2 and working every week with my club. But it’s a big commitment and life, as we know, can often get in the way of things.

I also had to make sure I was completely ready to embark on what I had been assured was no cake-walk.

Having missed my local UEFA B courses last year I kept a regular check on The FA Learning ‘national courses‘ web page, waiting for the 2014 courses to be released. The nearest to me that appeared on the system when they were published in November was at the London Soccerdome.

Formerly known as the ‘David Beckham Academy’ the Soccerdome is a fantastic facility in the Docklands area of the capital, situated right next door to the O2 arena, and only ten minutes by tube from Stratford. Ideal for me to get to each day from Colchester – subject to train delays.

I already knew the criteria required for the course and got to work on my application. There are four categories of coach that the UEFA B course is suggested for and applicants are encouraged to work in one of those areas.

As first team player/manager for my club, which plays in the Essex & Suffolk Border League, I met the correct criteria. I also made sure other relevant information was included in my application, which I submitted in early December, even though the deadline was the end of January.

Along with my Level Two action plan, in which my tutor suggested Level 3 would be a viable next step, I stated my previous playing experience (Isthmian League and Essex Senior League), my current coaching experience (I also run a local kids coaching school on Saturdays) and asked my club chairman to write a reference supporting my application.

And then I just had to wait.

I didn’t want to get my hopes up or tempt fate, so I told no one that I’d applied. I didn’t even mention it at work until I had been accepted on the course as I wanted to experience the journey as anyone else would.

All my coaching courses I have gone on – save the Level 1, which was put on for FA Staff in Regents Park back in 2002 – have been off my own bat. It’s quite personal to me and I didn’t want to cut corners or look for favours. Whatever I end up doing in coaching, I want it to be on hard work and merit, that’s just the way I am.

I had just wrapped up day four of the Youth Module 2 when the email dropped in from FA Learning: “We would like to congratulate you on being offered a place on the course,” it read. I was chuffed to bits.

So I sorted out my days off throughout the year and began to look forward to my next epic journey.

There are 17 days in all on this course, including three days of assessments, and it looks like I’ll miss two of them due to the World Cup in Brazil and a holiday.

In these blogs over the coming months I will attempt to detail what happens on the course, what is expected from candidates and also outline how I go about making up those days on another courses.

For now, my first piece of advice for anyone keen on taking the UEFA B course – make sure you are coaching in an appropriate environment, keep an eye out for courses near you, and, above all, get your application in as early as you can.

If you have any questions, please drop me an email at coach@jbfc.co.uk or you can follow me on Twitter @jbfootballcoach.