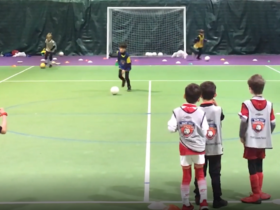 Having read through much of the course literature since Saturday’s session, we gathered back at the venue in Colchester on Friday and the first task was to quiz the other candidates on the subjects raised in the pre-course reading.

Split into groups, we each came up with five questions from a specific chapter in the book to pose to the other groups in a head-to-head, with a point gained for each correct answer.

The winning group would be the one with the most points. It was an interesting way to learn and take in information around physiological subjects like proprioception (a system of receptor nerves positioned in muscles, joints and ligaments which aid balance and co-ordination), neural pathways, physical development and motor control.

It’s around the classroom that topics and conversation really got me thinking. We’d already discussed practice development and skill development, so the theory of day three was largely about physical development.

In many sports, in fact in life, repetition is a vital part of development. The more you do something, the more it becomes second nature. One thing I always liken it to is driving, particularly clutch control. Learners can find it pretty tricky, bunny-hopping along, while regular drivers don’t even think about it.

So if players become as comfortable, through repetition, with jumping or passing, or maybe a technique more advanced – a step-over – then they’ll be more inclined to use it naturally. It becomes ‘grooved’ in the brain, creating neural pathways that grow stronger. We as coaches have to think about making repetitive practices interesting, fun and engaging.

A common phrase used is ‘practise makes perfect’, but for something to become perfect, the appropriate technique needs to be practised. If the practice is not relevant or correct, the technique won’t be perfect. ‘Practise makes permanent’ is a better way of thinking about it, says Gary Piggott, our course tutor.

According to the course books, 95% of neural development is complete by the age of eleven, so for younger players it’s perhaps better to work more on repetition of fundamental movements and techniques.

They begin to form pathways in the brain which become more solid as the player gets older and continue and refine the movements. But if the movements are not used or repeated, over time they will be lost, so there is always a need for maintenance as players get older. Use it, or lose it.

Well, that’s how I understand it anyway! But it highlights the many things that need to be considered when coaching players: what’s right for players according to science and physiology. It’s one of the four corners along with technical, social and psychological.

There’s certainly much to learn in the classroom, and I thought the theory sessions on Module Two were very rewarding. Not only was the syllabus enlightening, but the conversations we had as a group, learning from each other’s experiences, were highly absorbing.

A practice on Module Two with Essex FA

It was midway through day three that the conversation inevitably drifted towards the state of the game and the future of English football. I was surprised that it took that long as we all have our opinions on it.

As candidates on the course, most of us are disciples, if you like, of what The FA is trying to do to establish a philosophy, so there was more of a discussion rather than a debate.

We could talk all day and night about it as people really care, but it’s not one for now. What I will say, though, is that we as coaches have a responsibility to share what we have learned with others; players, clubs, parents.

In my view, youth football should be about developing kids as people and as players – to provide as much opportunity and experience as possible for them to fall in love with the game. Personally, I want my children to learn to read and write, but I don’t expect them to pen a novel just yet.

In the afternoon we headed back out on to the 3G for a session focused on game-related practices and the differences between a 4v4 game and an 8v8 game.

While we previously talked about planning practices for the outcome required and considered constant, variable and random practices, today we looked at two random practices that look very similar, but in themselves also offer a range of alternative outcomes and returns.

First, we played two 4v4 games. As players we found little time on the ball, the need to make decisions quickly, short passing, a lot of physical returns, lots of possession transitions and not really much chance to rest.

After ten minutes playing, we joined the two pitches together and played an 8v8 and you naturally notice a number of changes. Players have more time of the ball, there’s maybe more decisions, and a need to use wider perceptual skills.

Passes tend to increase in length (I was disappointed the number of times my team-mates looked to ‘go long’), it becomes tactical with players adopting positions, and there were places for some players to hide.

So even two game-related random practices can be vastly different from one another.

It again brings to the fore one of the key messages of the whole course. When planning a session understand what your desired outcomes are, consider the practice and potential trade-offs.

Playing 4v4 might be much better for what you are working on than 8v8, or vice versa. But only you will know – it’s for you as the coach to decide.