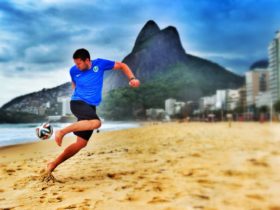 Having embarked on the Level Two Certificate in Coaching Football with FA Learning and Suffolk FA, throughout my time on the course I’ve shared my experiences to hopefully encourage others to take their next steps into coaching…

They say there is no substitute for experience, and when it comes to coaching it becomes clear that every session brings you something new.

Looking back to when I started this Level 2 course just before Easter, our tutor asked for one of us to take the first warm-up of the week.

Hands weren’t swift in going up, as everyone looked around at one another sheepishly. Taking a session, even the warm-up, was a little scary for some, especially with everyone being strangers. But coaching and communicating to groups is essentially why we were there.

But on my way to Ipswich for my final assessment six months later I was excited about delivering my topic ‘Finishing’. The confidence and understanding the course, as well as the hours and hours I’ve put in with my club, has given me has been amazing.

Rather than just putting on a drill, letting the players get on with it, then move on to the next thing, I’m now very happy about carrying out the coaching cycle to help improve the players; observe, see fault, coach and correct, recreate, play.

My only worry as I drove up the A12 for day one of two was ‘am I prepared enough?’. Preparation is a big factor in coaching. Turning up late to a session, not having anything planned, and not making things appropriate for the group are cardinal sins.

Many coaches will say that the preparation, as well as the evaluation, of a session is as important as the session itself to ensure the players get the best out of the time available.

I felt prepared and ready, but when I put my name on the running order, I was 12th of 16, which meant that my opportunity would come on day two. I knew I had another evening to go through the technical points and make sure I was happy with my final session.

With the sun beating down on the Greshams Sports Ground, we were ready for an early start so our tutor/assessor Rob ‘Scouse’ Munro could run the rule over ten sessions on day one.

With only 16 candidates, and all of the sessions requiring 12 players, it didn’t allow too many people to rest during the day. Of the ten 35-minute sessions, I took part in nine, so it was a tough day and as it wore on, the tempo of the practises slowed somewhat!

George, a teacher, delivered probably the day’s best session, though it was clear that everyone had improved and gained a lot of confidence. George was not able to attend day two, so found out his fate before he left. Unsurprisingly, he’d passed and set the bar for those of us following on day two.

After another look through some of the coaching books I’ve accumulated in recent months at home that night, I was ready. I knew I was up second in the morning, so as soon as I arrived back in Ipswich I began to set up.

I made it as simple as possible for my close-range finishing practices. Using the five a side pitch, I’d need two goalkeepers, four servers in wide areas and three forwards at each end. Oh, and a decent supply of balls!

For the ‘technique’ part, I asked the servers, on my call, to deliver the ball into one of the three forwards. Their objective was simple: hit the target. If they could take it first time, great, if they needed a touch, no problem, and if the shot was tricky, then they could move the ball to someone in a better position.

Once the shot had gone in, the other two forwards, and the shooter if possible, should be following up for any rebound.

Needless to say, there were a couple of chances to coach; first touch, look up to spot keepers position, pass/place ball into part of goal where the keeper isn’t. Sounds simple, but so is the game. Get the basics right, if you can elaborate and be more flamboyant, then great.

The progression to the ‘skill’ was simple, too, with one forward at each end becoming a defender to provide opposition and encourage a decision to be made by those in possession.

I have to thank Kev at this point, as he kept missing the target and gave me a good chance to get in there and coach. And he finally nailed it, but I’m not sure I can take too much credit for his ‘shank’ into the top corner.

In my first mock session back in April, our tutor for that week, Keith, suggested I do more demos to get my points across. So in the final section, the ‘game-related’, I stepped in a few times to show the players what was required, dispatching each shot with aplomb. Things were going well.

So when I wrapped it up, I felt good. The feedback from the rest of the group was positive; I just had to wait until the end of the day to find out how I did.

“I’m only marking you on Task 16 today,” said Scouse as we gathered back in the classroom for our verdicts a couple of hours later. “If you’re packs are up to date, and you get a pass on Task 16, then you’ve passed the course.”

As he handed me the observation checklist of my session, my eyes were instantly on the look-out for any APs, Action Points, which wouldn’t be good. Page one, all ticks. Great.

I flipped the page over and I was clear there, too. Ticks across the board. Yes, I had passed. I was now a Level 2 coach.

With a buzz around the room among the others who had passed, I reviewed my Action Plan and Feedback form.

I’m keen to progress with my coaching, and have already booked up for October’s FA Youth Module 1 course with Essex FA in Colchester, so was happy with a positive assessment from Rob: “Well-organised individual has potential to pass Level 3. Well done.”

Just what I wanted to see. But while I’ll look at the UEFA B at some point in the future, the important thing for me is to get out even more on the training pitch and, hopefully, help some keen young footballers enjoy their own experiences in this most beautiful of games…