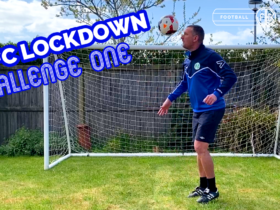 Having recently embarked on the Level Two Certificate in Coaching Football with FA Learning and Suffolk FA,  throughout my time on the course I have been sharing my experiences and hopefully encourage others to take their next steps into coaching…

Finally, with the new season just around the corner, I’ve been able to put into practice some of what I have learned on the Level Two course as I start to prepare my team for their 2012-13 Essex & Suffolk Border League campaign.

I, along with 17 others, started the course in Ipswich in the week leading up to Easter, so with fixture pile-up at the end of last season, I hadn’t had an opportunity to coach at my club until we resumed for pre-season training last week.

And so, after three sessions which have been pretty much all with the ball – instead of the running around in all other pre-seasons sessions I’ve done in the last 20-odd years – I met back up with my course colleagues on Thursday for our final continuation day before our assessments in September.

Having ticked off a trio of sessions from my required 12, which forms a large part of the course syllabus, I arrived at Gresham’s Sports Club much more confident than previously. I’d planned a few other sessions, too – some are still to be delivered on the training ground – and also prepared my session planner for my final assessment on ‘Finishing’.

It gave me a chance to show our tutor, Rob ‘Scouse’ Munro, and see what he thought. Now I can go away and have a run through at my club, in the knowledge that I’m on the right lines.

Having had regular chats about coaching with my friend at The FA, Pete Glynn, who is making the move from Wembley to St. George’s Park with his FA Learning colleagues next week, has enabled me to think about some of the important factors about coaching and how to pass this course.

One of the main areas that I think is vital, particularly for me, is to nail the key technical aspects of the topic I am coaching. So, for example, when it comes to one of the main attacking principles of creating space, as a coach you need to ensure that in the Technique, Skill and Game-Related parts of your session, the players understand the need to stretch the pitch long and wide, make angles, provide options for the man on the ball and maintain the space they’ve created.

So Thursday was the chance for me to talk to Scouse and the other candidates and make sure that I’m thinking about things in the right way and know what is required of me come September. Nailing those key points is vital.

We also went through our Coach Learner Packs to get them tidy and up to date – or even signed off if the 12 sessions were done, as in Lee’s case. But he is in the Army, so bound to be well organised.

After that, we had a couple of hours out on the training pitch, looking at the set-up for some of the sessions that will be delivered in September, and ironed out any creases that we might have had.

It was another worthwhile day in Ipswich, and as we left the room a few of us stopped for a chat in the car park, and it was clear they were all like me, so keen and committed to pass this course and gain that certificate. I can’t think of the last time I actually wanted to pass an exam this much, and was as keen as this to study for it.

So much so, that when I returned home, I got to work preparing a few more sessions using the session planner I’d made up on ‘Word’ and the excellent drill designer app on my iPad. It’s not essential that these are produced on the computer, but I think it’ll look much neater that way, and also allow me to save them for future reference to help me along my journey.

Now, it’s down to me to be prepared and ready for September when we all meet up again. I’ll certainly be able to get plenty of practice in over the next few weeks, and I’m really enjoy the chance to get out on the pitch with the players at my club. My only regret from this whole process is not doing it all much earlier. I suggest anyone even half thinking of taking the course, just get online to your local County FA and get booked up. What have you got to lose?