FA Editor Jamie Bradbury blogs from the England camp in Denmark. Today the Three Lions head to Viborg after the team’s quiz night at Kellers Park…

After the draw with Ukraine on Wednesday night, the talk in the press was about the next two challenges for the England Under-21s; the final must-win group game against Czech Republic in Viborg and the quiz night at Kellers Park.

On Friday, the camp’s very own Ted Bovis – entertainments manager Steve Wigley – gathered everyone together in one of the function rooms at the hotel for the much-anticipated quiz.

I was teamed up with Phil Jones and Henri Lansbury, Coach Brian Eastick and Masseur Stewart Welsh, who on Wednesday was greeted in Herning by chants of ‘Welshy, give us a wave’ by the Reading faithful who have followed us (and their keeper Alex McCarthy) in the games so far.

I must admit, I didn’t hold much hope having seen my own form in recent quizzes take a major dip. The aim for us was to not finish last and endure the forfeit of singing on stage to the rest of the troops.

It didn’t pan out how we’d hoped though, with the sporting faces and baby pictures rounds yielding few points. In the build-up to the trip, staff had been requested by Steve to send a photo of themselves as a kid, and four of them cropped up in the quiz along with four Premier League players’ baby snaps.

We got one right – a little blond lad in a Liverpool shirt was Steven Gerrard, easy. But Lampard, Rooney and Owen passed us by. We didn’t get any of the staff ones either, which included Stuart Pearce. But what was surprising was that one photo that to us looked like Derek ‘Degsy’ Wright, the physio, was actually his cohort Dave Galley. But Dave didn’t get it right.

One question in the puzzlers round was: Which two football teams always play a 2-5-3 formation? Barcelona was what some people guessed, but Welshy got it spot on – it was table football teams.

Phil and Henri hadn’t had a major impact on the scoring, neither Brian, though he did get a couple in the cryptic band names round, but I said that I’d try and do the business today, they can do it on Sunday.

It’s this type of thing that has become a staple in the Under-21s and really brings together the team and builds unity across the whole camp.

Training has again been sharp and lively as the lads prepare for a vital game and while we’ve published loads of great footage of goals captured by FATV, including a stunning team goal from Tom Cleverley in the two-touch game on Friday, it has been another perfect strike that has caused a stir online.

During Friday’s shooting drills, Fabrice Muamba curled a great effort past Alex in goal, striking the post with force before rebounding straight into the face of Jason Steele standing just a yard away.

Steeley is a great sport and was happy for this to go out and it’s reached nearly 200k hits on YouTube. (If you’ve not seen it yet, check it out here)

Though he says he doesn’t want to just be known for that, Boro fans will testify just how good he can be and Stuart has also singled him out for praise for the way he has trained this week.

While he hasn’t featured so far, he looks certain to be a regular for the Under-21s during the next campaign, with Israel the aim.

But our focus now is on reaching the semi-finals and it’s time for England to ask the Czech Republic some serious questions. 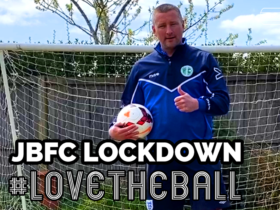